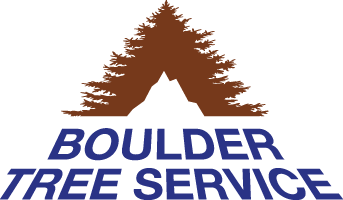 Home    Fire Mitigation    Site Plan Review    Forest Health    Burned Tree Work    Contact Us
Erosion Control Using Burned Trees
This page describes a new technique using burned trees for erosion control, developed by Eric Bader and the Boulder Tree Service. The technique uses materials on-hand to help catch debris in drainages and minimize property damage and erosion during rain events. These log dams need to be constructed high in the drainage and supported downstream with additional debris catchers.
Background Information
On September 6, 2010 at 10am, a wildfire broke out in Emerson Gulch, in the Four Mile Canyon Fire District west of Boulder, Colorado. With wind gusts in the forties and relative humidities in the single digits, this became Colorado's most costly fire in Colorado history, destroying 158 homes. The burn area is 6,000 to 8,000 feet in elevation and is predominately Ponderosa Pine with Doug Fir, Juniper and a grass understory. The fire area was about 6,000 acres. Some areas within the fire perimeter were high intensity burns that consumed all the vegetation, creating hydrophobic soils.

Debris Catcher
In January 2011, the log strainer shown here was constructed as part of the forest restoration in the Four Mile Fire area. The cutting technique here is lop and scatter. The drainage is an intermittent stream that would flow about one cubic foot per second before the fire. The drainage area above this dam is about 4 acres of severe burn. Only one acre upstream of the debris catcher was cut and some logs were used as contour logs. Branches and tree boles were removed from the stream bed and used on the hillside above the stream bed. 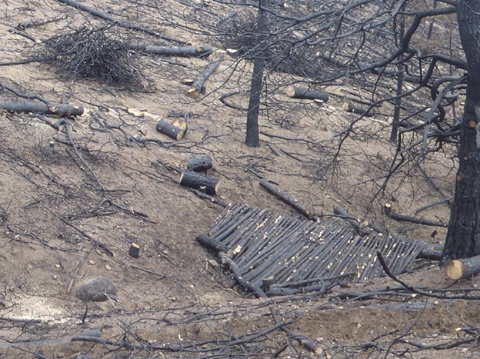 Debris Catcher Construction
The first trick to these debris catchers is to locate a suitable location. Ideally, find a larger diameter tree that can be directionally felled across the drainage where it can also be anchored on each side of the drainage. It is vital to anchor each side of the tree to each shore using natural rocks or tree stumps. Clean all the branches off the tree except possibly some branches underneath the tree that may lend support to the future weight of debris. An ample supply of nearby smaller diameter trees is needed to fill in the upstream side of the contour log. Branches should be removed from all bole wood. A 45 degree angle for the logs is ideal, spreading the future weight of debris equally between the ground and the contour log. The bottom of the vertical logs needs to be anchored to prevent water from eroding under them. This can be done with soil, rocks or larger diameter rounds on the bottom edge, which will get buried by soil when the water starts to flow. One main difference between this log dam and other techniques is that this debris catcher will hold a limited amount of material and once full, new debris will flow over the top and continue downstream. The horizontal contour support log needs to be large enough to support the weight of the debris. Additional logs supporting the contour log are not recommended as these logs can easily be eroded away. Avoid the need for support logs by leaving key branches on the contour tree.

Cost Effectiveness
Construction time for the debris catcher depends on the availability of materials and the skill of the people constructing it. With material nearby, the debris catchers shown here were constructed in about 6 hours, which includes cutting and limbing the trees. While slowing and catching debris is a benefit to flood control, the cutting of burned trees and leaving them in contact with the ground will accelerate rot and help the reforestation in the burn area. In addition to the multiple benefits of the cutting work, the cost per yard of debris caught is one to two hours of labor. 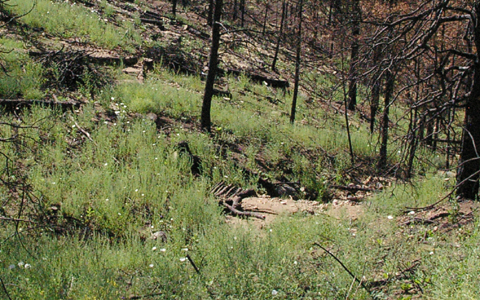 Local Flooding
On July 13, 2011, a summer thunderstorm developed over the burn area, dropping over an inch of rain in 30 minutes. A private rain gauge read 1.5 inches of rain near this debris catcher. This image was taken in late July after the rain storm. The debris dam caught about 5 yards of material and is full in this image.

Where Debris Catchers Should Not Be Constructed
These debris catchers should not be installed on streams or rivers, only on ephemeral streams. A debris catcher could be very dangerous, even fatal, if someone gets swept into one of these strainers.

Debris Catcher Still Working
This image is another debris catcher in the Four Mile Canyon Burn area. It has caught debris flow and has capacity for additional debris. The drainage area for this debris catcher is about 1-2 acres. This debris flow is from the same rain event mentioned above, where over an inch of rain fell in a short time period. 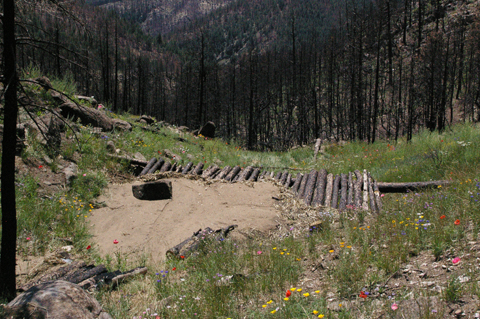 What Happens When Debris Catcher Is Full
Once a debris catcher is full, unless you have the resources to remove the debris, the debris catcher has served its main purpose. After a couple years, the surface vegetation should have had a chance to grow back and the hydrophobic layer broken down. Once the threat of flooding due to a wildfire has passed, I recommend leaving these debris catchers in place for a few more years. The debris on top of the logs will encourage the logs to rot. After several years of rotting, the debris catcher may fail on its own; if not, a cutter could make several careful cuts in the contour log, causing the debris catcher to drop to the stream bed. The logs will still be buried in debris and will continue to rot. Normal stream flows will flow over this debris, the logs will rot and should not move downstream.

Conclusion
Please send your ideas, concerns and feedback on this technique to the email address below. I believe this is a cost effective technique to reduce debris flow, help reduce the danger of a standing dead forest, reduce erosion, and allow for additional absorption of moisture and the growth of new vegetation. 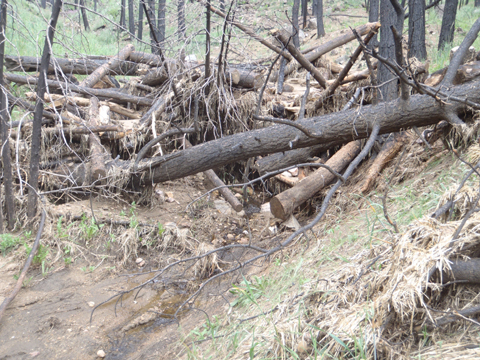 Limited Effectiveness of Trees Dropped Across the Drainage
This image is downstream of a cutting area where the cutters did not anchor logs to the slope and the logs washed downstream. In this image another homeowner had dropped a tree across the drainage to catch debris. While this technique does work, you cannot control how much debris gets caught in the tree dropped across the drainage. If this debris catcher ends up with too much debris, a failure of the dam will send a pulse of additional water and debris downstream. At this point, removing this debris or trying to release the logs holding this debris is extremely difficult.